A Land So Strange: The Epic Journey of Cabeza de Vaca 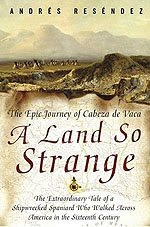 "For sheer drama and excitement, the journey of Cabeza de Vaca and his companions remains unrivaled, even by the adventurous standards of the Age of Exploration. Out of 300 men who set out to colonize Florida in 1528, only four survived: Cabeza de Vaca, two other Spaniards, and Estebanico. They became stranded. And to reenter European-controlled territory, they were forced into a harrowing passage on makeshift rafts across the Gulf of Mexico, years of captivity in what is now Texas, and a momentous walk across the continent all the way to the Pacific coast.

This small band of men thus became the first outsiders to behold what would become the American Southwest and northern Mexico, the first non-natives to describe this enormous land and its peoples. Conversely, innumerable natives living in the interior of the continent experienced the passage of the three Spaniards and the African as an extraordinary portent, a first brush with the world beyond America. The natives called the four travelers 'the children of the sun' because they seemed to have come from such unimaginably remote lands." (Reséndez, 2-3)

For our latest installment in the Back to History Challenge, I'm pleased to note that Andrés Reséndez, a professor of history at UC Davis who hails from Mexico City, has written an outstanding companion piece to Naufragios called A Land So Strange: The Epic Journey of Cabeza de Vaca. Although I chose the quote above to start with in part because it does such an effective job of selling Cabeza de Vaca's story, I also like it because Reséndez' sensitivity in considering both sides' reactions to this early New World encounter is typical of his style. As a result, his book, accurately described as "the extraordinary tale of a shipwrecked Spaniard who walked across America in the sixteenth century," is just a delight. What's more, reading this text side by side with Cabeza de Vaca's own version of events will probably only increase your appreciation of the original.

Where Naufragios basically begins in media res, for example, Reséndez thankfully backtracks to provide biographical information on ill-starred expedition leader Pánfilo de Narváez and a wealth of background info on Spain's maritime activities in the 16th century. Moving ahead to the even juicier parts of Cabeza de Vaca's narrative, Reséndez' history is equally adept at filling in the various lacunae that are either glossed over or left unaddressed in that early chronicle. An epilogue concerning what happened to the four survivors after they returned to "civilization" is particularly moving. All in all, this is an extremely engaging and eye-opening account that should be of interest whether or not you've ever read Naufragios in the first place. In addition, there are a host of carefully-chosen maps and images and a full 18 pages worth of suggestions for further reading for those who want to know more about the world of the four survivors--Cabeza de Vaca, Castillo, Dorantes, and the slave Estebanico--"who were European and African by birth...but becoming American by experience" (10). A superb read.

Bonus: Click here for a nice interview with Professor Reséndez where he talks about his book.