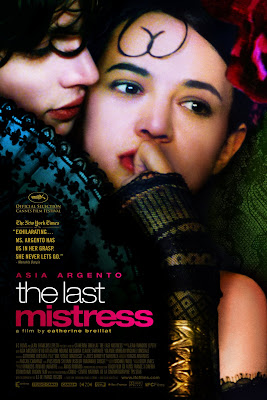 Uneven but entertaining period piece set in 1835, "au siècle de Choderlos de Laclos" as we're told at the outset. I never figured out whether this film was trying to mimic that novelist or to mock him, but a small dose of gore and an even bigger serving of nudity appear meant to modernize Les Liaisons dangereuses for jaded 21st century sensibilities. Asia Argento is positively bewitching as the half-Spanish/half-Italian courtesan from Málaga who scandalizes Parisian society types with her unapologetically carnal behavior, but her fearless and feral performance (the best thing about this movie by far) is way more convincing than her character's long-term love affair with dissolute pretty boy Reyno de Marigny (Fuad Ait Aattou)--who isn't really all that interesting a figure when it comes right down to it. The script, brought to the screen with a certain emotional verve thanks to the exquisite cinematography and evocative background music that complement the narrative's gilt-edged tropes on love and desire, is based on an 1851 roman by Jules Amédée Barbey d'Aurevilly which was criticized for its immorality. 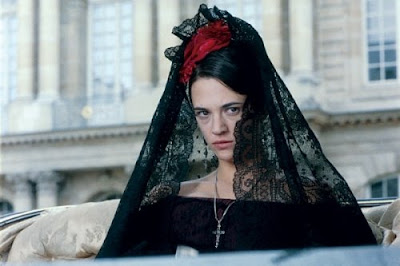