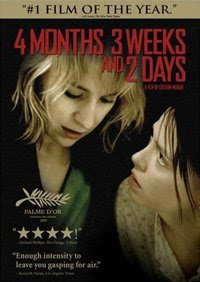 I missed this wildly acclaimed import when it was out in the theaters a while back, but that's OK because it's not exactly the type of thing you'd want to watch with popcorn in hand anyway. Recreating a day in the life of two college students--one seeking out a black market abortion, the other helping out her roommate in a time of a need, both getting far more than they'd bargained for in the process--back in 1987 Romania, director Cristian Mungiu's film is every bit as grim and disturbing as you might expect from the theme. In fact, it's even more harrowing than I'd expected due to the high quality of the acting (Annamaria Marinca as Otilia and Vlad Ivanov as the abortionist Bebe are particularly outstanding) and the deceptively simple way in which the narrative is presented. Avoiding a moral judgement on his characters and eschewing things like background music and flashy editing, Mungiu instead delivers a probing, documentary-like inquiry into what might have motivated the students and the "doctor" on that fateful day. Along the way, the spectator's occasional peeks into the Romanian society of the time--the black market and bureaucratic cultures, the everpresent concern about carrying state ID cards, the city vs. country prejudices revealed at a birthday dinner party--foreground the drama of 4 Months, 3 Weeks and 2 Days without overwhelming the events unfolding before your eyes. The result is a tense, wrenching, entirely believable story that feels so "real" that it's extremely unsettling. I'll leave it up to you to decide whether that's a recommendation or not. (http://www.ifcfilms.com/) 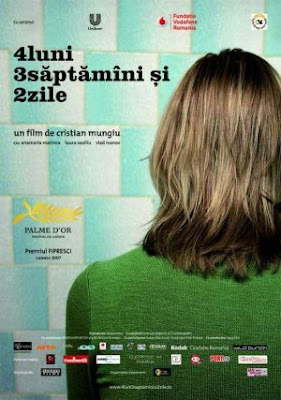 *I should note, in passing, that the extras on the US DVD release are excellent. I don't normally do a very good job of mentioning these things, but the interviews with Mungiu and DP Oleg Mutu are fascinating and will aid your appreciation of the filmmaking decisionmaking that went on behind the scenes. A short documentary feature, 1 Month with 4 Months, 3 Weeks and 2 Days, is also interesting, revealing how Romania's first ever Cannes Palme d'Or winner was received by the Romanian public on a caravan tour assembled to take the film into parts of the country where movie theaters no longer exist.
Publicadas por Richard a la/s 10:07