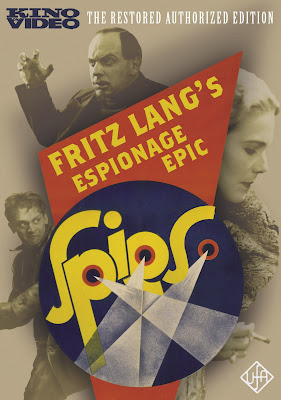 Although this odd German drama/romantic comedy/spy caper's probably the most formulaic silent film I've seen from Herr Lang to date, it's entertaining enough that I'd still recommend it to anyone looking for a change of pace from the modern crap du jour. Rudolf Klein-Rogge and Willy Fritsch star respectively as the mysterious Haghi, who runs a secret espionage empire out of a massive bank, and as No. 326, the undercover Secret Service agent assigned to hunt him down. However, it's the beautiful Gerda Maurus who continually threatens to steal the show as Sonja, an operative for Haghi whose ill-timed love affair with No. 326 puts both her and her dapper new friend at risk from Klein-Rogge's megalomaniacal villain.

While the good guy/bad girl love affair between No. 326 and Sonja is in many ways the most predictable and least appealing aspect of Thea von Harbou's script, there's a lot to admire here anyway. "Throughout the world...strange events transpire" we're told at the outset. Within seconds, the opening sequence (above) proves it with a motorcycle chase, assassinations perpetrated by masked gunmen, and newspaper reports of an international crime wave--all set to Donald Sosin's pulsating score. On the storytelling front, don't be surprised to discover that a Japanese character, the diplomat Dr. Matsumoto (Lupu Pick), stands out as one of the few honorable people in a world full of opium den habitués and traitors for hire. Although this foreign patriot will pay the price for an all too universal human mistake in one of the film's most superbly-edited moments, the sensitivity of his portrayal underscores the movie's internationalist and modernist sensibilities.

Visually, Lang and cameraman Fritz Arno Wagner offer up other treats in the decadent Weimar fashion. In one scene, a boxing match takes place in the center of what's then revealed to be an elegant nightclub ballroom. In another scene, a runaway's troubled past is conveyed solely by two blink-and-you'll-miss-them images suggesting physical and sexual abuse at the hands of her parents. If both Feuillade's Les Vampires and Lang's own Dr. Mabuse, the Gambler seem to be more complete pre-1930s crime epics, Spione/Spies still has enough border crossings, false identities, international derring do, and, yes, romance to make it easy to envision it as the blueprint for all later spy movies--the James Bond franchise be damned! (http://www.kino.com/)