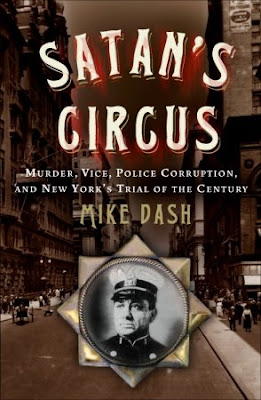 Since I'm suddenly behind on all my reading challenges except for the one that hasn't started yet, I'm glad that the 400+ page Satan's Circus will at least count for one of them. A meticulously-researched look into NYPD Lieutenant Charles Becker's death sentence for the murder of gambler Herman Rosenthal in 1912, the book's at its best evoking the period flavor of the Satan's Circus area--here described as the stretch of turf ranging vertically between 23rd and 57th Streets and bounded laterally by 6th and 10th Avenues--or what the author calls "the most glamorous, notorious square mile on earth" (p. 5) for its infamous all-night drinking, gambling, and prostitution district. Dash is strong at setting his main story within its historical and political contexts, linking the Becker case to just one stage among many in the rise of police corruption and reform movements in pre-Times Square Manhattan. Unfortunately, the parts dedicated to the "trial of the century" itself didn't really do it for me. Despite a colorful cast of real-life characters and a case in which a dirty cop seems to have been successfully framed for murder by an even more unscrupulous hoodlum, this chronicle never really connected with me as much as I would have liked. It's a good to very good read that fans of New York history should appreciate, but it probably could have used a little more dirt on the entertainment district to liven it up for everybody else--or at least me! (http://www.crownpublishing.com/)
Publicadas por Richard a la/s 17:20