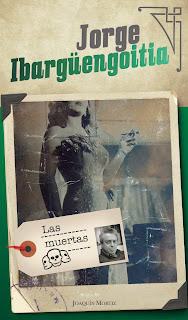 Las muertas [The Dead Girls], a selection from Ignacio Echevarría's list of the essential books in Spanish-language literature since the 1950s, was a fun introduction to the Mexican Ibargüengoitia for me even if it struck me as maybe more a four-star rather than a five-star caliber read if truth be told--the pulp awesomosity of that cover notwithstanding.  Wait, did I just say "fun"?  Loosely based on an appalling Mexican true crime story in which a family of four brothel-owning sisters engaged in a decades-long orgy of white slavery, serial killing and body dumping on a scale that beggars the imagination, Ibargüengoitia's fictionalization of the events mercifully shapeshifts into something of an arch genre novel chronicling a similar case with a much lower body count.  The text's humor (a whorehouse named México Lindo; a drug dealer whose distinctive indigenous facial features earn him a description as "una especie de Benito Juárez del hampa" ["a sort of gangland Benito Juárez"]), a quasi-police report style ably incorporating a range of narrative points of view, and its breezy tone all make Las muertas go down smooth from an entertainment standpoint, but one of the things that makes me suspect I might be underrating it as mere dark satire is something that's missing as time goes on just as clearly as the titular dead girls: an authorial POV.  As Mauro Libertella notes in his review for Clarín, Ibargüengoitia's narrator here is one who only relates events, who doesn't doesn't pass judgement on the crimes themselves, "como si la historia se contara sola y se explicara a sí misma, porque finalmente no hay nada más díficil de explicar que la violencia extrema" ["as if the story were told by itself and was self-explanatory because, in the end, there's nothing more difficult to explain than extreme violence"].  Food for pinche thought. 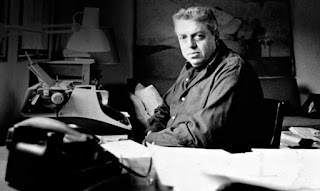