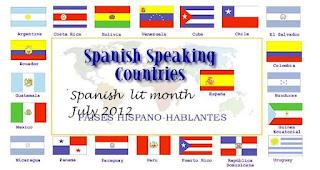 ¡Hola!  Just wanted to let you know that I have some good news for anybody tired of the one-dimensional language content of the blog this week: I'm going to take a break from blabbing about Spanish-language books tonight...to share a post about other people blabbing about Spanish-language books.  Psyche!  Although Stu and I still plan on presenting some sort of an end of the month link round-up/wrap-up thing for all of the Spanish Lit Month posts at the end of July, I thought I'd get things started early in order to make it easier for everybody to find out about the many other event posts already out there.  Please note that this list is a work in progress: I'll be updating it off and on over the next couple of days.  ¡Saludos!


Stu, Winstonsdad's Blog
Welcome to Spanish Lit Month
View of Dawn in the Tropics by G. Cabrera Infante
The Blue Hour by Alonso Cueto
The Shadow of What We Were by Luis Sepúlveda

Caroline, Beauty Is a Sleeping Cat
Amirbar by Álvaro Mutis

Emma, Book Around the Corner
Mafalda and Me

Séamus, Vapour Trails
Spanish Lit Month - Plans and "Five from the Archive"
The Shadow of the Wind by Carlos Ruiz Zafón