Killing Pablo: The Hunt for the World's Greatest Outlaw 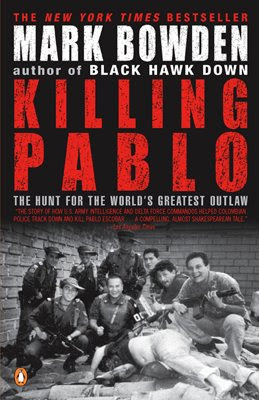 A riveting account of the sixteen-month manhunt for former Medellín drug cartel leader/one-time Forbes magazine-certified "seventh richest man in the world" Pablo Escobar. Fans of Bowden's earlier Black Hawk Down won't be surprised by the frenetic pace of the narrative or the reporter's agile reconstruction of events based on interviews with many of the key participants involved, and those new to his work can look forward to a solid piece of investigative journalism that reads very much like a thriller. While primarily a painstaking reportage on the operation that led to Escobar's 1992-1993 downfall at the hands of a US-trained and supported Colombian secret police "Search Bloc" employing state of the art eavesdropping devices and an alleged shoot first/ask questions later methodology, there's much more here than meets the eye. Bowden does a magnificent job at recounting the grim parade of assassinated political leaders, judges, reporters and others who spoke out against the violence during Colombia's reign of terror, but to his credit he doesn't shy away from questioning whether the end actually justified the means in this case either. Recognizing that Escobar might have avoided justice indefinitely but for the counter-terror campaign against him waged by an equally violent vigilante group with other drug cartel ties called Los Pepes, Killing Pablo ends with the uncomfortable suggestion that this rival death squad's spree of targeted assassinations and intimidation bombings probably worked hand in hand with the Search Bloc in going after human targets knowingly or unknowingly provided by US intelligence personnel--with little or no ultimate impact on the flow of cocaine into the United States.

(NB: This is an alternate choice for one of my Back to History Challenge selections. The original list of books to be reviewed can be found here.)