The Pilgrimage to Santiago

"That evening, talking with Padre Agustín, there was no doubt at all in my mind that the cloister of Santo Domingo de Silos was among the most radiantly beautiful places on earth. Should I perhaps have been disturbed by my own very peace of mind? Here was I, after all, an atheist, brought up tepid C of E and now standing in a Roman Catholic monastery chatting to a monk who referred to my home city of London (albeit chucklingly) as 'Babylon,' and I dared to experience such a thing as peace of mind. But the thought did not disturb me. I merely became aware of how few secular buildings in the world were capable of inducing such a condition of peace. Why, asked General Booth, founder of the Salvation Army, should the Devil have all the best tunes? And why, I felt, should God have all the best buildings?" (Mullins, p. 159)
OK but occasionally uninspiring account of the "long journey to heaven" (120) also known as the pilgrimage to Santiago de Compostela in Spain. While I didn't bond with Mullins quite as much as I would've liked to given the vividness of passages such as the one cited above, his hybrid travelogue/art history work/historic overview of the camino does a nice job of looking at its subject from the point of view of someone enamored of all the art and architecture along the various routes. I use the plural here because Mullins spends a good deal of time--a little too much for me, in fact--celebrating art finds on and off the beaten track of all four of the main pilgrim roads out of France. One problem with this approach is that it took the frequent use of a car to make visiting all these sites possible, something that seems to have prevented the author from conveying the first-person passion of a quality backpacker's account like Conrad Rudolph's engaging Pilgrimage to the End of the World: The Road to Santiago de Compostela (University of Chicago Press, 2004). In the final analysis, this may be less meaningful a book for those wanting to understand the pilgrim experience (medieval or modern) from an insider's perspective than it would be for those merely curious about architectural-oriented travel in France and Spain near the end of the Franco era. 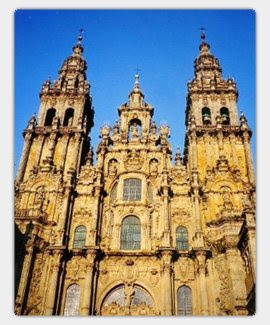 Santiago de Compostela
(NB: This is a probable alternate for one of my Back to History Challenge books. Conrad Rudolph, the humble "backpacker" mentioned above, doubles as an art historian/medievalist in his spare time!)
Publicadas por Richard a la/s 01:21