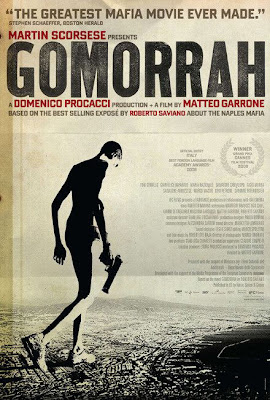 After just missing a chance to see this Cannes Palme d'Or winner in Buenos Aires last month, I finally got to see the big screen version of Roberto Saviano's mob masterpiece last Friday. Although the film adaptation isn't quite as mindblowing as Saviano's book, it still delivers the moviegoing goods with five gritty and uniformly well-acted stories having to do with a few of the lesser-known organized crime activities--the manufacturing of bootleg haute couture, the prominent use of children as soldiers in the local gang wars, toxic waste dumping in Italy and abroad--said to be emanating out of Naples' real life slums. While all of these storylines will be familiar to readers of Saviano's riveting chronicle, Garrone keeps things interesting here by drifting in and out of the various narrative threads with few of the normal cinematic cues. Even more intriguingly, he boldly tells his story without any apparent unifying point of view--leaving it up to the spectator to determine the film's moral compass. Although those who like getting hammered over the head by American directors may miss the point, the result is a strong, unsettling work that would make a fine double bill with Francesco Rosi's classic Salvatore Giuliano. I look forward to adding the DVD to my small but growing collection of cinema italiano sometime soon. 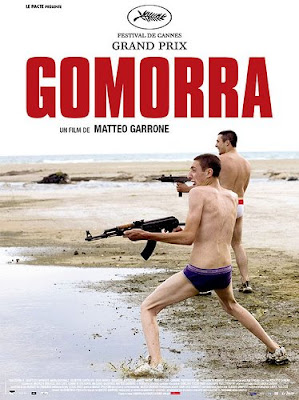 For more on the book and film, see Barbie Nadeau's "Streets of 'Gomorrah'" in Newsweek here.
Publicadas por Richard a la/s 13:53