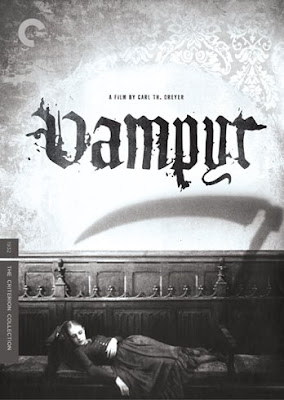 Carl Theodor Dreyer's 1932 Vampyr, his first sound film, is as much an art statement as it is a vampire movie. Loosely based on a pair of 19th-century short stories by Sheridan Le Fanu, this recently restored print pairs a surrealistic narrative structure with Dreyer's usual compositional brilliance to create a true shadow world in tune with its subject. While the odd, intentionally disjointed plot has to do with the fate of a character named Allan Gray, an occult student/enthusiast who wanders into a strange inn on the outskirts of Paris late one night and immediately begins to suffer the effects of a series of supernatural encounters, one of the ways in which it breaks new ground is that the audience is never sure whether Gray is delusional, dreaming, or perhaps already dead (shots like the one below, where the character appears to see himself in a coffin, are of little help). Real life aristocrat Nicolas de Gunzburg gives a woozy, somnambulistic performance as Gray that's just perfect for the part, and Dreyer and his crew accentuate the oneiric elements in the script with a succession of images--ghost couples dancing to a band of ghost musicians, a gravedigger "undigging" a grave, a female vampire victim's carnivorous smile--noteworthy for their austere beauty. Maybe not the fastest-paced film ever--but the Man Ray-like visuals more than make up for it, trust me. (http://www.criterion.com/)

Note: I haven't seen all the extras on this two-disc set yet, but what I have seen has been impressive. Highlights so far include Jorgen Roos' Carl Th. Dreyer, a 1966 documentary on the director, and Casper Tybjerg's "visual essay" on the artists and artwork that influenced Dreyer's style on this film.
Publicadas por Richard a la/s 22:26