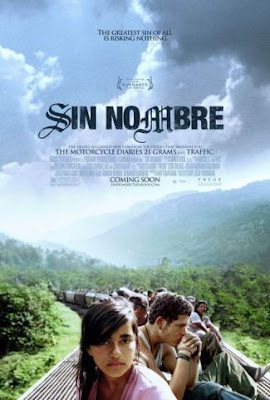 I saw the U.S./Mexico coproduction Sin Nombre yesterday and thought it was a decent movie despite a couple of major flaws that continue to grate on me today. I should start by noting that first-time feature film director Fukunaga is to be commended for taking on the themes of Central American immigration to the United States and gang violence of the Mara Salvatrucha variety, two sometimes interrelated topics that have yet to receive much play from other U.S. filmmakers. In traveling scenes like the one pictured below, the director and his team even manage to highlight the desperation along the route to the so-called promised land in a manner reminiscent of both The Grapes of Wrath and Heart of Darkness. Unfortunately, other aspects of the film--like the way it turns into a typical thriller more and more as the main characters head north--are way less impressive on the storytelling end of things. While photogenic leads Paulina Gaitan (Sayra) and Edgar Flores (Willy/El Casper) do nice jobs as a Honduran teenager trying to make her way to family in New Jersey and a Mexican ex-gang member trying to flee from his old way of life, the way the sheltered teenager and the killer with a heart of gold so quickly develop a bond is unconvincing in the extreme: Hollywood, baby, Hollywood. Rating: 3/5 stars. 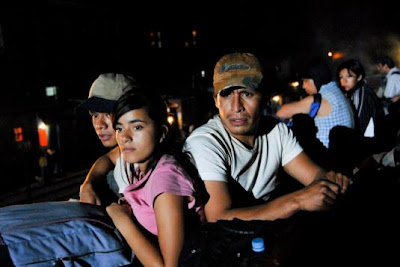