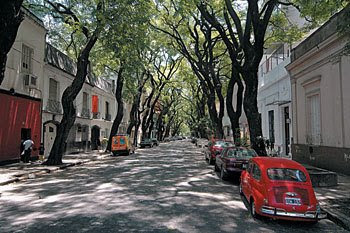 Palermo, Buenos Aires
(Click here for the earlier part of this trip report)
Tu, March 17: My wife and in-laws had some shopping to do in the barrio Once section of Buenos Aires, but they kindly dropped me off at Plaza Serrano in Palermo so I could do some wandering around on my own in one of my favorite parts of the city (I was sad to miss Once since I only know it from Daniel Burman's 2004 film El abrazo partido [Lost Embrace], which takes place there, but these are the kind of decisions one must make on a short trip). Although Palermo's one of the bigger neighborhoods in town, the area I was strolling in is usually referred to as Palermo Soho or Palermo Viejo. I'm not sure where the exact boundaries are, but this part of the neighborhood reminds me a little of Greenwich Village in New York with fewer in-your-face hipsters and a more musical accent. The tree-lined streets above are typical of the barrio's tranquility during the day, but at night the place becomes a madhouse with pub crawlers, tourists, and some of the most photogenic people in town taking in the bar and café culture. A couple of years ago, the big joke was that some of Palermo was being even further subdivided into yet another new district, Palermo Iraq, on account of all the American tourists who had invaded it! I enjoyed walking down the fiction-friendly J.L. Borges street toward leafy Plaza Italia, getting lost on some other street on my way back (without a map of any sort, I didn't realize that Plaza Serrano's official name is Plazoleta Julio Cortázar), and having a beer and a coffee outdoors at Malasartes near the appointed rendezvous time with the rest of my family: a wonderful corner to people-watch from as this particular stretch of real estate has more beautiful women passing by per square foot than anywhere I've been outside of Barcelona and Paris. Not that I noticed, being married and all! I'd dipped into a couple of bookstores and record stores before that without buying anything--the calm before the storm--and somewhere along the way I stopped at an ice cream shop because I just had to have a cono at this one particular place because of its advertising: they had a cardboard cutout of Gardel wrapped around a street sign with a doctored image of the tango titan holding an helado in his hand. How cool is that? Back at home in Burzaco later that evening, A cooked up a delicious dinner of rabas (calamare) and breaded filets of merluza and pejerrey (two types of fish) that we'd bought from the pescador (fisherman, or in this case, the traveling fishmonger) when he was making his morning rounds in the neighborhood with his carrito full of fish on ice. My in-laws also receive frequent visits from the sifonero (a guy who delivers carbonated water bottles that come with their own siphon--the water amazingly never goes flat) and a biweekly visit from la pollera (a woman who delivers free-range chickens door to door). Is it just me or doesn't this seem like a way more "civilized" form of life than having to shop at Whole Foods or your local chain supermarket of choice? 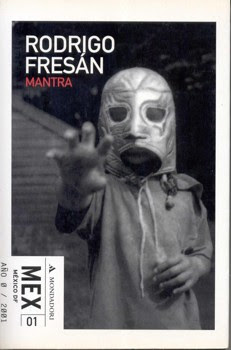 Wed, March 18: My wife hates the hustle and bustle of big cities everywhere--too much sensory overload--so we agreed that I'd go into Buenos Aires on my own today because I love sensory overload! Adroguébus operates a combi (shuttle van) that leaves from the train station in Adrogué and drops you off in the middle of downtown Buenos Aires near the Obelisco on 9 de Julio for a mere 7 pesos ($2 U.S.), so I hopped on and headed off for another day of exploring. "Exploring" in this case meant walking up and down the microcentro looking for books and absorbing life away from home, so I started off on calle Corrientes and started walking away from 9 de Julio to the west. What a day! Something like 13 million people, about a third of Argentina's population, live in its capital city, so walking down these main downtown arteries gives you a real feel for the more monumental side of things here. While Corrientes is far from my favorite street, there are masses of people everywhere and a librería (bookstore) seemingly every two or three stores. Sort of like a Times Square with books! I walked down Corrientes and some of the surrounding streets most of the day, stopping at calle Callao on my first run and ending up near Plaza San Martín in the Retiro district on the other side of 9 de Julio on my way back. Crazy walking which led me to a totally accidental discovery of one of Borges' houses! The part of Corrientes near where I started includes some of the theater district, but my happiest moment in the day was finding Distal Libros (http://www.distalnet.com/) at Florida 528: a decent but fairly nondescript smaller bookstore that had a copy of Rodrigo Fresán's Mantra for sale. I had this book checked out of my local university library for months without being able to find another copy for sale, and my attempts to order it online led me to discover that it's selling for upwards of $50 in the U.S. because it's out of print or just impossible to find here for some reason. I only paid 36 pesos (about $10 U.S.) for Mantra at Distal, and I was so excited to find a copy of this paperback grail at last that I briefly debated buying a second one to give away as a gift. I eventually decided against this, leaving the remaining copy at Distal for the next tourist from a faraway land to fortuitously encounter some day, and bought a copy of Ezequiel Martínez Estrada's 1942 Radiografía de la pampa (oft cited as one of the defining works in 20th century Argentinean letters) for 49 pesos instead. A bookstore or two later, and I had a copy of Juan José Saer's La pesquisa under my arm from the Ateneo bookstore (think of a good version of a B&N or Border's in the U.S. stocked with all those Spanish titles you could only dream about) at Florida 627. I could have gotten this book from the library, but the 37 peso price was just too good to pass up for this literary souvenir (Saer was one of my favorite fiction discoveries last year thanks to a marvelous professor I know, so here's a review of another work of his I read for the 2008 Orbis Terrarum Challenge). On my way back to Adrogué on the combi, I basked in the glow of my incredible book-buying good fortune and then laughed when I saw a parrilla called "ESTOY LOCO" along the route. Hey, I'm crazy, too! Anyway, here's a short article on Fresán, an argentino now living in Spain, and his Mantra, a kaleidoscopic feat of writing set in and inspired by Mexico City, that may help you understand why finding this one title in itself would have made for a totally satisfying book-buying trip for me. Which means that the other dozen or so to come were just icing on the Mantra cake!

Th, March 19: I don't remember what C and my in-laws had going on during the day, but I took advantage of some free time to head into the city solo again. Today's destination: San Telmo, one of the oldest neighborhoods in town and one often hailed as the most "authentic" by people wowed by its history and beautiful, rapidly deteriorating architecture. I hadn't bought a map for this trip yet, so I wandered around Av. Carlos Calvo dodging loose tiles and trying to remember where Plaza Dorrego was located. I gave up temporarily a little more than a block away, dipping into the pastelería (pastry shop) Il Forno on Bolívar 933 to sample a couple of empanadas de carne and pour down an agua con gas: my typical traveling food in Bs.As. whenever I'm hungry or just need to regroup. The empanadas were OK but nothing special, but I ended up hitting the jackpot when I ordered an individual torta de ricotta (ricotta pie) and a café con leche from the spectacular looking pastry counter. I guess now's as good a time as any to mention that Paris is the only other city I've visited yet that can rival Buenos Aires for the quantity and quality of its breads and sweets. After leaving Il Forno, I wandered around the rest of San Telmo for a while enjoying its ramshackle ambience and paying a token visit to Plaza Dorrego--the lovely little plaza whose fame has only increased since one of the Bush daughters had her purse stolen here under the watchful eyes of various Secret Service agents a couple of years back! While heading down calle Defensa in the general direction of the microcentro, I stumbled upon the famous parilla Desnivel at Defensa 855 and decided to sit down for a "snack" in the interests of "research" for this informe. Although I wasn't all that hungry so soon after my last meal, I decided to order a serving of mollejas (sweetbreads) a la carte anyway since they're relatively hard to find in the states--probably because they gross almost everybody else out! I also asked for a glass of the house vino tinto with my appetizer, and the combination of masterfully-grilled mollejas, jarrito (little jar) of wine, and non-U.S. bread was so entirely satisfying that I decided to do some more research. I ordered a serving of chorizo next, which was also insanely good and a steal at a mere 5 pesos (~$1.50 U.S.). Feeling more than a little gluttonous but incredibly satisfied that Desnivel had lived up to the hype, I stopped at a locutorio to check my e-mail and waste precious time on a blog post ("Now Blogging From Buenos Aires") that I later deleted. Before the ride home on the combi, I made a quick detour to Corrientes again to pick up a couple of books at Librería Hernandez (Av. Corrientes 1311). For those keeping score, one book was for a friend and the other one was for me: Santiago Rosa's Abril rojo, a Peruvian thriller that won the Premio Alfaguera de Novela for 2006. I didn't eat again until way later that night, but my mother-in-law prepared two different kinds of milanesa for us, one meatless (eggplant) and one not (the "usual"). An excellent day for parilla and comida casera (home cooking) fare--if you ever get to eat in Buenos Aires, you'll soon understand why those I Love Choripan t-shirts are so popular! Coming soon: Mar del Plata and more.