A red card for boring might seem a little harsh of a penalty for this otherwise unassuming novella about a young married woman's struggle for financial and emotional independence in postwar Spain, but on the other hand you and I both know that I'm never going to get my 50 pages of reading time back.  A mostly uninvolving follow-up to Laforet's dazzling debut effort Nada--maybe not soporific exactly (well, except for an excruciating crying jag scene at the end) but sort of bland and not all that exciting in the tradition of bands what follow up raw debut albums chock full of three minute pop songs with overly restrained sophomore efforts laden with a bunch of overproduced, medium tempo numbers clocking in at five minutes plus to demonstrate their newfound maturity as songwriters or something. Why "maturity" always has to equal a lack of hooks and/or energy is a matter I'll leave for you music types to explain to me someday, but in the case of El piano [The Piano] the parallel question is why the talented Laforet would want to abandon that vivid first-person voice of Nada for the colorless third-person narration here.  I don't get it.  Whatever, no big deal, nobody ever promised me I was going to enjoy everything I read for Spanish Lit Month anyway.  (Menoscuarto Ediciones) 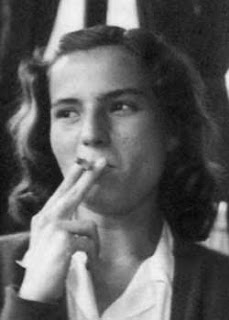 El piano is the first of seven Laforet novellas featured in the collection Siete novelas cortas [Seven Novellas, not available in English translation at present].  The other titles include La llamada, El viaje divertido, La niña, Los emplazados, El último verano, and Un noviazgo, all written between 1952 and 1954.  El piano appears on pages 21-75 of the Menoscuarto edition.
Other works by Laforet include Nada [Nada], 1945, a novel I highly recommend; La isla y los demonios (1952); La mujer nueva (1955); and La insolación (1962).  In 2007, Menoscuarto put out a collection of Laforet's short stories under the title Carta a don Juan.
Caroline of Beauty Is a Sleeping Cat, one of the earliest people to get behind the idea of a Spanish Lit Month taking place, enthusiastically reviewed Nada on her blog last year.  Click here for her great post.﻿
Publicadas por Richard a la/s 00:22